The Romans influenced the development of Valais a great deal. They built a major road linking Martigny with the Upper Valais and it was the Romans who introduced rye to Valais as well as the first bissen (water ditches) used by the Romans for irrigation.

Roman times in Pfyngut began with the intensive use of the Pfyn Forest accompanied by an expansion of arable farm land. Sediment samples from buried, humus top soil contain pollen seeds from walnuts as well as rye, allowing them to be roughly dated. Both crops were introduced by the Romans and can be evidenced in the lake deposits of Pfafforetsees and Lac de Montorge from around 140 BC. Thanks to the stratigraphic sequencing, we can determine with some certainty that during this phase of intensive land use in the later Iron Age and at the beginning of the Roman times, the Roman road was built and the first irrigation systems were laid. The construction of a large connecting road in the 2nd/1st century BC was primarily for military use and connected the Pfyngut region to the Martigny-Upper Valais road axis.

The Roman road  through Pfyn Forest was studied at two points located approximately three kilometres from each other. The cleared segments are 150 metres long in Pfyngut, about 10 metres respectively from the Mörderstein (Murderer’s Rock).

The Pfyngut road section was examined in detail. The construction of the three metres-wide carriageway set on wooden foundations is unusual. The supporting construction was made of 5 or 6 beams (or ¾ trunks) laid lengthways, hewn or left rough. A filling of gravel, branches and bundles of birch rods stabilised this timber and ensured drainage of the construction. A layer of round logs or thick boards was placed on this foundation. The small number of metal construction nails shows that these crosspieces were either slotted in, or fixed using wooden pegs. The road coating was made from a mixture of gravel and dirt. The addition of limestone would have cemented the lightly convex surface. Thanks to the meticulous examination of the road, including micro-morphological analysis of an intersection, three phases of construction can be identified.

The road layout of Pfyngut can be compared with similar constructions in Switzerland and neighbouring countries – particularly the plank paths or Prügelwegen (Roman log paths) which have been around since the Dark Ages. For a comparison, the best example from Roman times is a section of the Via Claudia, which was discovered in Austria at Lermoos. The wooden foundation was in such good condition there that a precise reconstruction of this sub-construction, specially designed for swampy territory, was possible. In Pfyngut the substrate and the humid zone west of the excavation site probably determined the construction method of the road. One can also ponder whether in Roman times, the alpine roads at the bottom of the valley were not generally laid out in this way, to avoid their being destroyed by floods.

The many shoe nails lost on the street enable us to date the construction of the Pfyngut section (towards the end of the 1st century BC) as well as its duration of use and its purpose (after the 3rd century AD). Carbon-14 dating shows, however, that this transit axis was still in use until the Early Middle Ages.

The path section of Pfyngut can therefore be regarded in a larger context as part of the road network passing through the Rhône Valley from Roman times up to this day. It is possible to establish an astounding consistency of the route. This stability however can be ascribed to the topographical obstacles (scree from the river) which have hardly changed in more than two thousand years.

The decades of the Roman shoe nail

The several hundred shoe nails buried in the layers of the Roman road of Pfyngut, provided the opportunity to draft the first chrono-typology of a material type, where the circumstances of the archaeological findings can be very different. Shoe nails were not only found in road gravel but also in settlements, sacred sites, graves (inhumation graves and urns) or in hoardings with a votive character.

In order to define the typological criteria, a uniform recording method was initially defined. The top view or bottom view of the nail head was sketched, as was intersection which was used as a reference axis. The inner and outer diameter and the head height were measured, as was the overall weight. The decorative marks of individual nails, the general condition and degree of corrosion was also noted.

The multitude of inventoried nails was then compared with the ancient metrological system. The weight of the intact surviving nails can be brought into association with the various subdivisions of ancient weights and measures, namely with the Roman ounce and the Attic and Aegian obulus. This correlation enables the typological main groups to be discerned, whereas the inner and outer measurements and the height of the nail head form subgroups. The decoration consisting of globules and lines is not one of the typologically relevant criteria, particularly since it probably refers to trade signs here. The typological catalogue is categorised according to weight, from the heaviest group to the lightest. The weight of the nail is first referred to in Roman ounces, in so far as it concerns a culturally relevant value, then the decimal figure as a constant unit.

The suggested chronology is based on factors which could influence price, production and size of the nails. The size and weight of the nail seem to be dependent on the value of the denarius. Radical changes of the coin system can therefore be used as key data. Military and political events also seem to have influenced nail production. The decoration markings and individual special head shapes are also important for the chronological classification of the nails. Important for the creation of the typo-chronological system were also nails which originated from well-dated, closed finds.

The main part of the study concerns the shoe nails found in Pfyngut. The body of the findings was expanded however to include nine further find locations in the canton of Valais, each of which requires a separate interpretation. The typology and chronology of the nails from the layers of the Pfyngut Roman road enabled three construction phases to be identified. Crucial here were the intact preserved nails – one can assume that they were rapidly covered over. Seriously corroded nails, on the other hand, would have been exposed to the air for a long time, lying on the top of the road surface. They point to usage phases. The findings of the first nail typo-chronology far exceeded our hopes. The correlation of the nail weight, the production unit, and the ancient metrological standards made it possible to draft a coherent typology. Further examinations are necessary, however, to extend the chronological framework, to narrow down the price of the production unit and also to expand the geographical framework of this work. 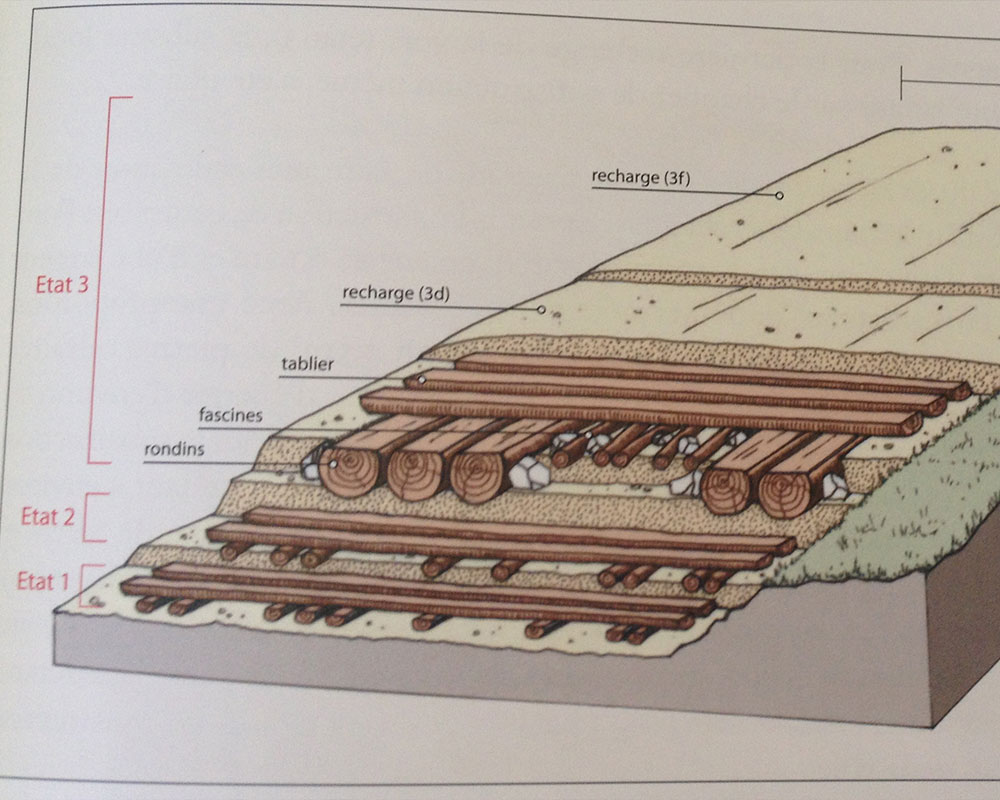 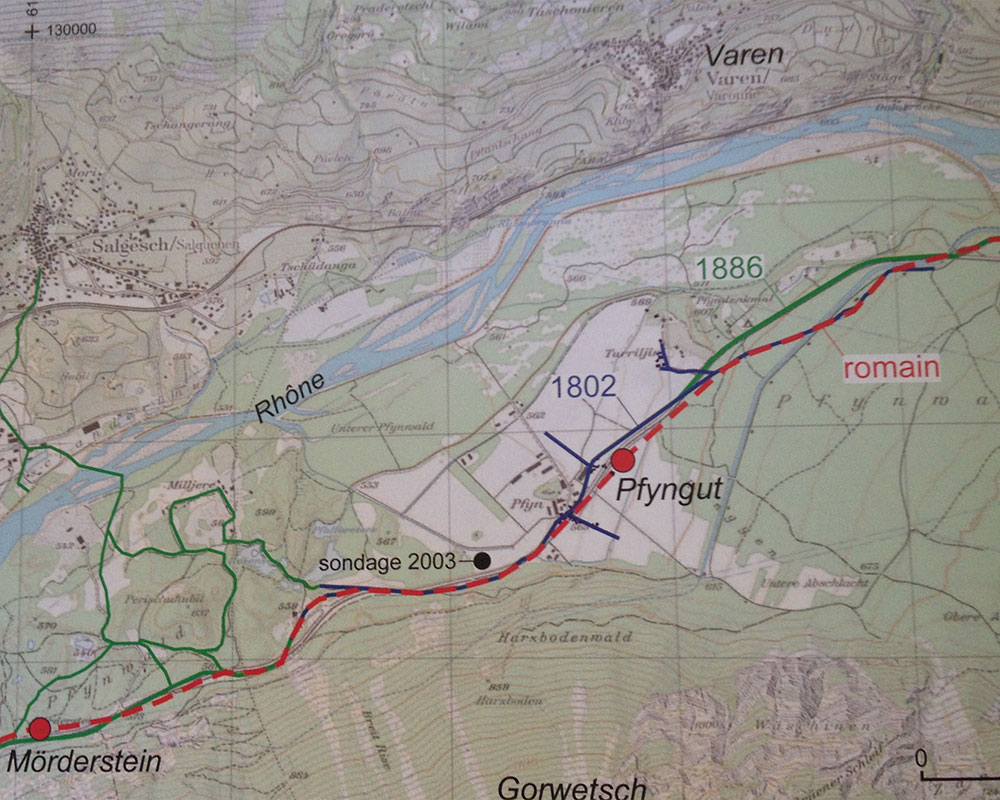 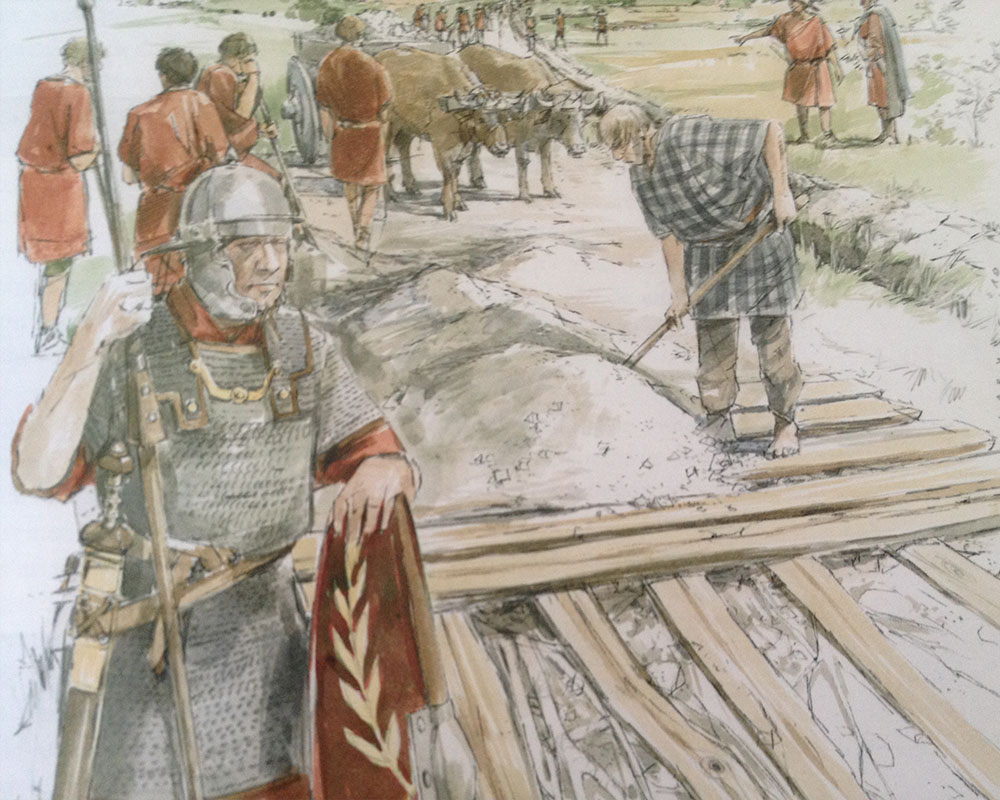 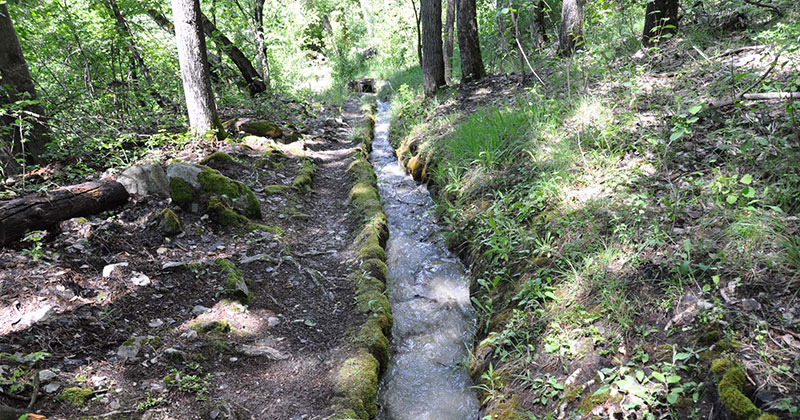